One of the first things I did at the start of a new school year was  order personalized pencils. I would hand them out with abandon to students, coworkers, parents, or anyone having a hard moment. I bought them from this rad woman, The Carbon Crusader. She has all kinds of awesome options, but I tended towards the ones that had Fuck on them in a variety of different ways. Pencils that say funny shit on them are hilarious. When someone is having a hard time, giving them a pencil that says,“You magnificant motherfucker” or “Professional giver of no fucks” or “Fuckity Fucking Fuck” makes a big impact. They laugh, their shoulders relax a little, they take a few breaths. They are reminded that someone thinks they matter.

Yes, I gave pencils with curse words on them to students… a lot of them. One of my favorite memories was when I gave them to one of my 6th graders. He had been diagnosed with a seizure disorder and the family had struggled through a horrific summer where he was seizing multiple times per week. When he came into the 6th grade my main goal (I was the dean, so in charge of the grade) was to make sure he was safe yes, but mostly to make sure he laughed. After months of being seizure free, he had another one. Because of course, right? That’s what happens when you are trying to figure out a brain issue, especially medication levels for an adolescent who’s body and brain changes by the minute. I knew this was a really hard set back, but I also knew he hated when everyone fawned over him. So, I gave him a tiny envelope that said, “open in case of seizure,” filled with pencils covered in profanity. When he opened it, his smile was magic.

In my twelve years in schools I went out of my way to make people feel seen. I am not perfect. I can be a real asshole who talks shit when I feel insecure and I was ridiculously slow when it came to grading. But, what I know I got right more often than I got it wrong, was making sure the humans I interacted with felt like they mattered. The pencils are also an act of selfishness. Making others feel seen feels so damn good. I hoard that joy. I rely on it when I am  having a hard time. After last year I decided to leave teaching for a bit to regain some space after a really hard year. When I left my old school I had a ton of pencils left, so I hid them in the desk of a friend I knew would take up their cause. Monday afternoon, I opened Instagram to find a message from a student I had never taught and did not know well: I had just landed back in Austin after a weekend at my first creative conference, XOXO Fest. It had been a really long weekend where I felt challenged, stretched, and super vulnerable. I had loved the conference, but had also been totally overwhelmed. XOXO was all about making folks feel like they matter, making folks feel seen and valued. The conference was a perpetual reminder that when we make people a priority, we get the reward of all the beautiful things they are doing. We also get the gift of folks sharing their stories. XOXO was a reminder that people care a whole lot about all kinds of things, and mostly a reminder that when you make others feel seen and heard, magical shit happens. For a weekend you could walk up to anyone, chat about anything, and share the things you care about without worrying if folks would be nice to you. The festival is an act of recognition. That’s what I had been thinking about all weekend.  XOXO asked me to realize what it means to make time to see others, to think about new things, to celebrate cool shit, to be challenged, to be present in shared experiences, to make other people matter. It was restorative.

I want the rest of my life to be about building a career that centers on supporting the emotional development of individuals and communities so we can create cultures of dignity. I had no idea how to explain that to people over the weekend.I showed lots of folks a small flip book I made about how to process a freak out. I went on long tangents about how the cultural narrative we have created around adolescence is broken and we have to change it. About how we aren’t doing enough to protect young people from harm or taking advantage of the opportunity to promote enduring positive development. About how we are really good at holding young people accountable for their behavior and actions without valuing their emotional realities. About how I want the narrative to be very different.

After XOXO, I now know this means I have to help a lot of folks think about their thinking.

I don’t know everything about what I am doing now that I am not a classroom teacher.  Someone recently helped me realize I will always be an educator. XOXO helped me feel seen and a little more centered.

Here is what I know now:

Now, I make cool tools to help folks engage, reflect, and try to process their emotions.

I want all humans to have healthier relationships with others and lead with self-compassion.

I want us to be open to diverse points of view, lead with empathy, embrace vulnerability, create cool things, collaborate, and kick ass.

The folks I met at XOXO helped remind me that I matter, that what I am doing matters, even though I am totally scared. That’s the thing about recognition… it’s really fucking helpful. We all need acts of recognition, the ones that make us feel seen. But we also need to make space to make others feel seen. For the Andys’, they give us XOXO. For me, among other things, I give pencils with swear words on them.

That instagram message, coming right after I landed, reminded me that I have done a lot to make others feel like they matter. So, that’s what I am going to keep doing. 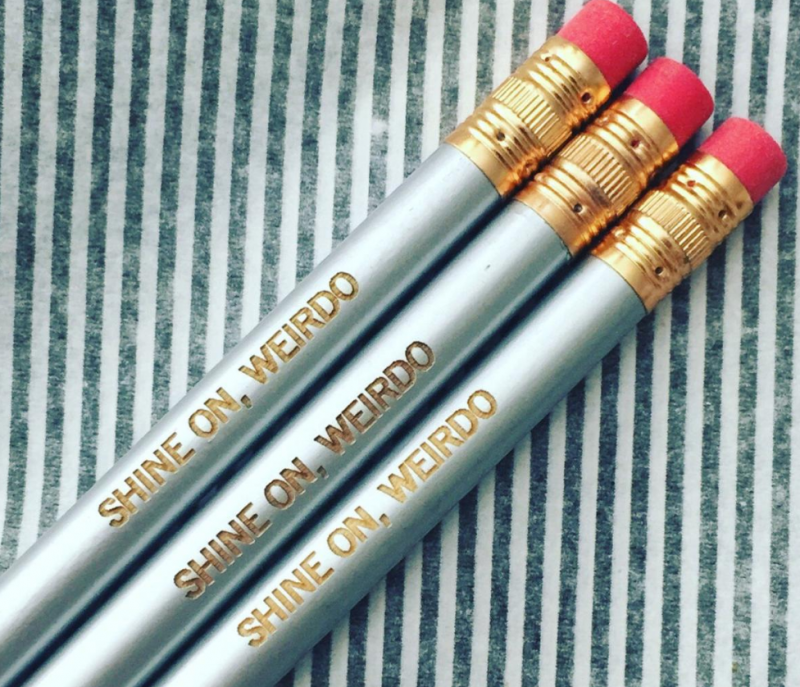